Assault in the Underhive

Not much hospitality down here

My Investigation Notes
With Terlian behind the wheel of the truck, Odessa and I were on the back with one of the vagabonds. Arion told us through the vox that he had spotted multiple figures within the ruins but could not pinpoint who was shooting at the truck.

Another sound of gunfire rings out from the ruins and hits the truck’s windshield once again. This time we hear Terlian say, “I’ve been hit!” At that very moment the truck speeds up once again and Odessa and I both fall off the flatbed. We pick ourselves up and I noticed that the vagabond has also fallen off a few meters behind. We start walking forward and tell Terlian to stop and pick us up once again.

When we get to the truck, I get behind the wheel and tell Terlian and Odessa that I will drive slowly towards the bonfires and stop right about 40 meters from the towers. As we get closer, I tell Odessa to light up whoever she sees. From my vantage point, I see multiple lightning blasts fly out from the back of the truck towards the first tower behind the bonfires. Afterwards, we do not hear anymore gunfire. We decided to drive up to the first tower and investigate on foot. 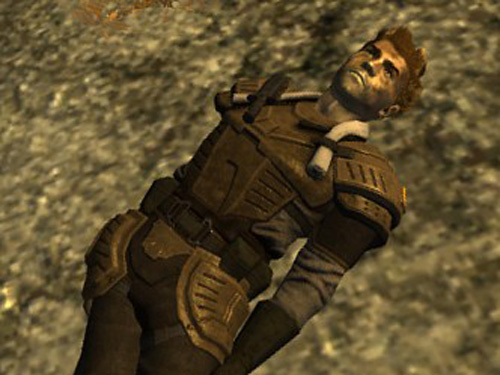 As we were in the truck, Arion was able to sneak up on a rooftop combatant and ascertain that we are in Rolando’s territory and that there are approximately 15 people total. That interrogation did not end well for the combatant because the next time we saw him, he had fallen off the roof with a large sword wound in his back.

With Terlian at the roof the truck watching the street, Odessa and I go and investigate the interior of the tower. I immediately spot someone within and opened fire with my laspistol. Before this combatant could react, I see his eyes go wide and he starts running the opposite direction. From my previous experiences with Odessa, I can accurately assume that one of her warp powers has gone awry and was affecting everyone within sight. It takes all my willpower and experience to not look in Odessa’s direction. Since I did not feel any warp like powers tugging at me, I start running after the combatant I shot.

My target runs into a larger room and then jumps through a large hole in the wall, which leads outside the building. By the time I get outside, he has a bit of distance on us. I pull out my lasgun and score a direct hit to the same arm I hit before. At this point, he climbs on top of a large pipe and stumbles off the other side. As I am approaching the fallen combatant, I can hear who I believe is Odessa following me a couple of meters behind. Without looking at her, I say, “Are you ok, Odessa?” Her simple response, “Yes, I’m going to flank him on the left.” Odessa, who seems to be back to normal now, and I see the lifeless body of a combatant on the other side of the large pipe.

Arion checks in and tells us that he is shadowing two more combatants that are heading towards to towers. Odessa and I get back to the first tower and climb the stairs to the top. We discover a body that seemed to have three ears on his head. He is badly charred by what looks like lightning blasts and the solid projectile weapon he was using was rendered useless from Odessa’s attacks.

We signal Arion to return to the rooftop because he wanted to record evidence of our team’s handwork via his pic recorder. He told us that he discovered a locked dwelling with people inside. Since he was alone and did not have a lock pick, he decided it would be more prudent to have backup. Knowing that Arion had also spotted people around the old Magistratum building, we decided infiltrate that building first before hitting the dwelling.

With Terlian guarding the truck and looking out for anyone on the street, Odessa climbed back up the first tower to get a higher vantage point of the town. It would be up to me and Arion to get into the Magistratum building. I was originally going to climb the wire ladder up the building but we discovered that whoever was on the roof pulled the ladder up. So we had to infiltrate through the adjacent building and slowly climb up the near crumbling stairway. I gave Arion one of my grenades and the plan was to have Odessa suppress the rooftop combatants while Arion and I snuck in from behind.

As soon as Odessa’s lasgun roared, Arion was up the stairs. I heard a grenade blast and climbed up the stairs after Arion. It looked like the grenade was on target because when I got to the roof, Arion was disposing two combatants at once. I saw a third combatant by the end of the roof towards my left. I quickly grab cover and open fire with a semi auto burst from my lasgun. By this time, Arion had snuck behind the rooftop stair way and was going to flank the last combatant from the right side. He quickly made work of the last combatant. With no one left on the roof, we started to tally our body count and take inventory of any equipment