Down to the Lower Levels - Down to Three Stakes' Rest

Leaving a mark on the Babyfaces

When we last left our defenders of the Imperium, they were trying to make their escape from the Screaming Wheel with their prisoners from the Babyfaces gang, the most notable being Skinner. The smoke had cleared on the Causeway above, where Intios & Odessa had fought a couple of Babyfaces gangers who had individually come to the scene. The crowd at this point had, for the most part, succeeded in getting out of the way of the suddenly erupting deadly skirmish.

Arion sent up a prisoner & followed closely behind. In the meantime, Intios saw the smoke & dust of the midhive swirling far down the causeway, indicating a rapidly approaching vehicle in the distance. The Adept took the opportunity to do a bit of quick looting…err, rather, checked the bodies of the felled foes. The vehicle arrived even faster than he anticipated, causing he & Odessa to grab Skinner & drag him as quickly as they could to the nearby alley mouth.

It was a sedan, painted in the bright colors of the Babyfaces with a large skull on the hood. It came in at velocity & screeched to a halt in front of the alley that Intios & Odessa had dragged Skinner.

Bullets, grenades & las bolts flew. When the dust settled the gangers lay still & the Acolytes endured. At the end of the skirmish in an attempt to escape, a ganger had slammed the vehicle into the alley mouth. Despite the damage, the Cell loaded their prisoners & themselves inside and drove to the level’s stairway. It was going to be a few hours journey to the main Arbites precinct fortress in the upper level of the midhive, so here they saw to the wounded. Even their captive Skinner received treatment; can’t have him bleeding on the magtrains, much less dying on them before “Q&A”. Intios tried to diagnose their wheeled trophy’s smoking ills, but it was damaged beyond his rudimentary mechanical knowledge – so they abandoned it there. 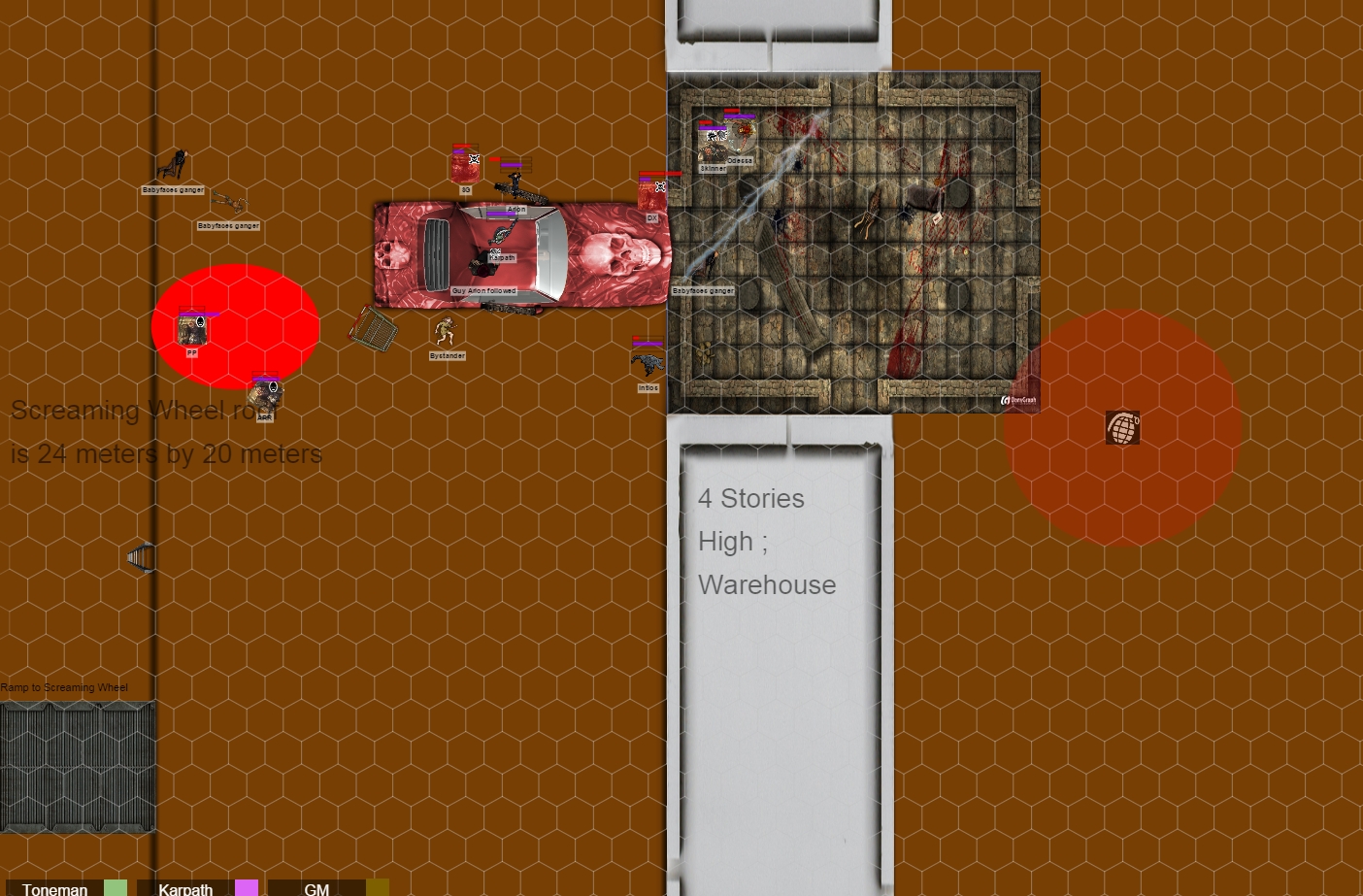 Some hours later they were in the interrogation room that Arbitrator Haug Godgrafen had provided for their use. Unusual for an Inquisitorial Cell, none of the acolytes were particularly skilled at the art of interrogation, but Odessa knew the basics…and she got to work. Without permanently scarring him, she gathered from their captive Lino that he worked with the Babyfaces in their extortion racket. While the gangers insisted on collecting the money, Lino kept up communications with many of the establishments in the Pasterkamp area that purchased “protection insurance” from the gang. Odessa was satisfied that he didn’t know anything about the gang’s Cold Trade activities.

Next subject for her exceptionally strong will was Skinner. He clearly wasn’t happy about revealing his xenos source, but after some effective persuasion he told the psyker the name & “address” of where he got his most expensive wares. Zax Holthane of the Trade Sable, who maintained an office of sorts in the lowest reaches of the midhive. Skinner told them Holthane tended to conduct business in Three Stakes’ Rest. It was the unofficial name given to an ill-delineated area of forlorn, decaying habs, forgotten chambers and structurally unsound passages and roadways. He helpfully offered that, though it lied above the generally accepted boundary, Three Stakes’ Rest was in many ways an extension of the lower hive. Skinner had met Holthane there once, when they were starting to do business together. The acolytes had Skinner leave the Sable Trader a message, to try to schedule a meet, to which Holthane was amenable. The acolytes once again contacted GlorAuthority Captain Gaston Bernotas to see if he’d ever heard of this Three Stakes Rest. That lower level of the midhive is thousands of square kilometers large, with countless regions & areas – practically none of which are well defined or officially named. However, to Captain Bernotas’ surprise, it did ring a bell. He confirmed what Skinner had told them about Three Stakes’ Rest. What Karpath, the only member of the Cell with any navigational abilities, really wanted was some kind of directions – something that can be quite elusive when talking about levels that low. Bernotas had never been there, but after a few calls he was able to sketch a poor map of where it should be. They were looking for a waterfall, one that came out of a monstrous piece of forgotten tech known as “the Consolium”. While Karpath focused on the ‘where’, Intios worked on the ‘how’, by persuading the Arbites to lend the Cell a vehicle for the lower midhive. He also asked Godgrafen to provide for the storage of the dangerous xenos statuary they had obtained in the Screaming Wheel. The Cell’s tally to the Arbites continued to grow. Acolytes with las weapons took the opportunity to charge them using the Arbites equipment – and off they went once again to the midhive’s lowest reaches.

Several hours later, Karpath was hopefully driving them towards the Consolium in an unmarked Arbites sedan with decent wheel clearance. The ex-Guardsman’s sense of direction surprised even him and it was no more than three hours after they’d reached this level of the hive that they started to hear an avalanche of falling water. This huge tech landmark was quite a sight – as advised, you couldn’t miss it since it was the size of a large building. The machine & surrounding area was covered with the rich verdure that copious amount of water can bring – but Arion’s keen sight spotted movement to the right of the giant machine, as the Cell approached. They circled the area, for they’d been told there was rumored to be more than one portal, all of them near the Consolium.

Off a ways on the opposite side of the giant device from which Arion had seen movement a bit earlier, they spotted a lone individual who then reentered the treeline disappearing from sight.

The group then investigated the area Arion had seen movement earlier, driving right into the encampment they found there. There was a ruin in a clearing & a few individuals showing obvious scars and wearing skins went into the structure upon their vehicle’s approach. The Cell dismounted and asked for directions to Three Stakes’ Rest. They wanted to barter for any information, but the Cell decided they didn’t really have anything they were willing to part with – and so drove on.

The acolytes went in search of the lone individual they’d seen & came upon some tracks they presumed to be his. The assassin tracked these human footsteps to the base of one of the huge pylons around the perimeter of the Consolium. There he saw footpegs leading up about five meters, where there was a rope, hidden in the foliage. Up he went, finding markings of a path of sorts all they way up to the giant mouth of the machine, where the water came flowing over the edge. Back at the vehicle, the rest of the group removed a small part of the engine, worked to camouflage it & joined Arion. Inside the device’s huge orifice was the deafening roar of the waterfall & the darkness deep inside where the water was coming from. They also saw the reason why there were so many avians, that Intios had identified as scavengers, flying around the machine’s mouth. Some flotsam-looking material was hooked on some tendrils of foliage growing near the water’s edge & there were two corpses tangled in it. The avians had no head as per se but squirted out a liquid that seemed to partly emulsify what it hit; then the creature would hop over and slurp up the partly liquefied feast. There was a large brass plaque covered in wording along the top of the machine’s mouth, but none recognized the words. Lastly, there was a square shaft that descended into the darkness & a metal cable hanging down.

Led by Arion, one by one they climbed down deep into the blackness – some 70-90 meters was the consensus. The shaft descended further, but it was at this point that they came to a corridor they could walk out into, either North or South, and they egressed the shaft to the South. Odessa detected the stench of the warp wafting out of the shaft farther below. 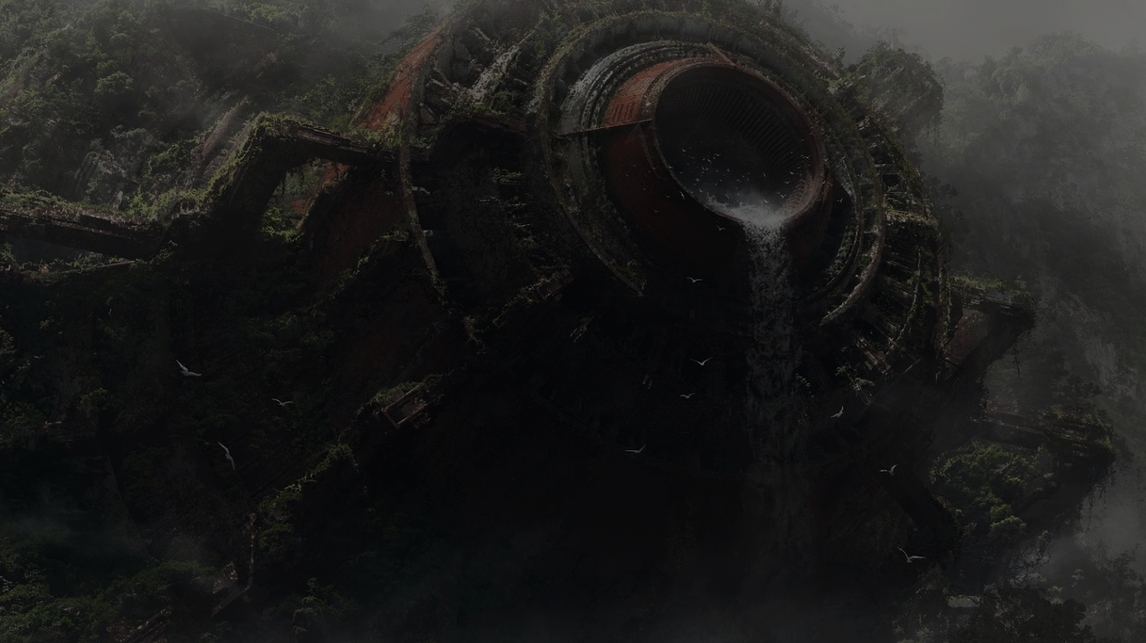