Hunting in the Underhive 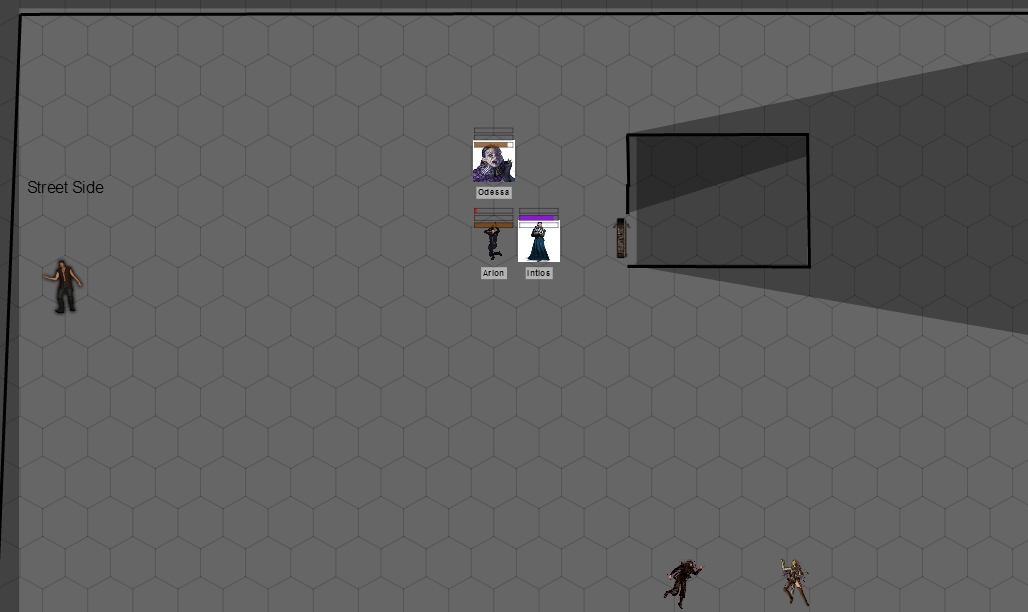 Members of the Cell had just swept the Magistratum office roof of opponents and, finding the roof door now unlocked, proceeded down the stairs forthwith. As they descended, the buzzing began anew.

In the dull enhanced lighting provided by his light enhancing goggles, the Adept noticed aged pictographic scrawl on the walls of the stairway. Having some familiarity with such writing from his exposure to the Valoda Akadēmija, where he was first stationed with the Administratum, he offered the group what he thought it meant. This was being claimed by someone by the name of “Diris”, one of the only actual words on the wall. What “this” was, was anyone’s guess – the building perhaps, but there was no further definition of what was meant. There seemed to be there the story, probably quite dramaticized, of how Diris came about possessing it. There was also a “Coretta” involved – girlfriend perhaps? Mother?

Finding an ajar door the only available path at the bottom of the stairs, the Assassin ventured through to scout ahead. He explored an empty hallway, which featured one direction closed doors & open doorways – while the other, towards the street, opened up into a room that was the entry hall of the Magistratum office. Arion listened at doors that wouldn’t open & viewed prisoner intake rooms, some with cells and others with showers. Then he spied several inhabitants sitting at desks & beckoned his colleagues to quietly join him. One of those in the office, unaware of his presence, exited the room, where Arion waylaid him with his blade. The man cried out in his final moment, alerting his comrades, who grabbed their shotguns & took immediate cover behind desks.

Intios, not one to miss many opportunities to employ anti-personnel ordinance, hurled two grenades inside. One got away from him, landing harmlessly in the middle of the room. The other, however, dropped just behind the desk that appeared to be the cover for more than one of those inside – and exploded right where he wished.

Around this time, the door at the end of the hallway slammed open & the buzzing sound filled the air.

Inside from their angle, they could see it was a room containing a table, chairs & the far wall seemed to be a window. Arion, judging that the Cell’s flank was now exposed, ran for the door. From his new vantage point, just before slamming the door closed, a glance revealed the room’s wall on the right, which had a large tank of some kind against it. The side was too opaque from there to see what was inside…but it was reconfirmed that the noise, now quite loud, was coming from that room. He slammed the door.

About that time a shotgun blast rang out, taking out a piece of the wall near Intios. Odessa darted out from her cover to engage this new foe in a nearby doorway. She promptly lit him up with warp-derived strands of bio-lightning, leaving him smoking but still standing. This was more than

he bargained for – he bolted into the hallway & sprinted towards the exit into the street outside. However, Intios dropped the fleeing foe from behind with a loud crack from the las weapon he wielded.

That same door at the end of the hallway slammed open again…and Arion fleetly dashed down the hall to it once more. Odessa ran down to join him and then stretched out her fingers to fire warp-lightning at any foolish enough to show themselves. As if on cue, the Cell witnessed a robed figure dart right-to-left across their viewpoint through the door. The bolts lanced out from Odessa’s fingertips but instead scorched the table the figure ran behind. Arion charged into the room & was hit from automatic ballistic rounds fired by someone crouched behind the same desk where the robed figure had taken cover. Intios joined his fellow acolytes at the doorway. Wounded but undaunted, Arion continued his charge. He saw the robed figure, now seeing she was female, saying something and raising her hands towards him. The assassin chopped her down with his sword. Intios fired his las pistol at the man still crouched behind the desk, striking the wall behind; he then ran back down the hallway to retrieve his dropped Lasgun.

Somewhere in this brief window, the Cell took notice that the walls of this room was lined with these large tanks that were packed with highly agitated slightly oversized insectoid creatures. They also became aware that this was obviously the source of the overwhelming buzzing sound…and that there was something frighteningly unsettling about them.

The man behind the desk adjusted the aim of his longarm & fired a burst at the tank nearest the doorway, shattering one of its panels…the buzzing was now near deafening….