Inquisitor Adorjin, the Luminous Reproach, the Liber Daemonica & the Kabal of the Crimson Woe

Starting combat in cover has its advantages

We walked into the black ship with the Acolytes sent by Inquisitor Soldevan. Their group leader seemed to be led by Calculus-Logi Trempan. Also in their group were Enginseer Molochan, Sergeant Forden and Lady D. We decided to work together for the time being to accomplish our mission to locate the Luminous Reproach.

As we walked deeper into the black ship, we were being surrounded by human apparitions of all types. Their leader, who identified himself as Crovus, asked if we were with the Inquisition. As the spirits circled in around us, we heard another voice yell out, “The dead shouldn’t plague the living, Crovus.” As we heard this voice, the other spirits stepped aside to allow a spirit of a man in a long coat step forward. Crovus referred to this new spirit as Vogel and called him a heretic. Vogel began walking away but before he did so, he implied that he could tell us more about what was hunting us.

We followed Vogel to what seemed like his personal quarters. He identified himself as Ishtan Vogel, former acolyte of the Inquisition, serving Inquisitor Adorjin. Vogel immediately recognized all of us as current acolytes. He was the one who sent Adorjin’s signal from the black ship when it entered real space. I asked him how he was able to get a signal out when our own modified vox casters could not penetrate the space hulk. He told us that the bridge of the black ship had a transmitter that allowed him to send short messages out of the hulk for the Imperial Navy to receive. Vogel knows that with the hulk entering real space so close to Scintilla, the Navy will have no choice but to destroy it. Vogel told us to take Adorjin’s possessions and leave this hulk quickly.

We asked if the Luminous was still with Adorjin. Vogel looked at us inquisitively and asked us if we were only here for the blade. What else is there, we asked. Vogel told us among Adorjin’s possessions is the Liber Daemonica. This is the book of the Grey Knights and as one of their highest honors, gave the book to Inquisitor Adorjin. Vogel told us the story of how Adorjin was possessed at a young age by the daemon Nekaybraianon. Adorjin made it her life’s work to track and take vengeance upon Nekaybraianon. After two centuries, Adorjin was finally able to trap Nekaybraianon within the hold of this black ship, now code named Twilight. Vogel pointed us in the direction of Hold 13.

Upon entering Hold 13, we can only see one light source a few meters above the ground. As we get closer to the light source, we all make the realization that what we are walking on are the frozen remains of the daemon Nekaybraianon. All around us are tentacles, gaping mouths, fangs and eyeballs everywhere. The light source is coming from the Luminous Reproach itself. Both frozen in time and in ice is the display of Inquisitor Adorjin, wearing her power armor, driving the Luminous into the body of the daemon. As I gaze upon Adorjin’s frozen body, I have a strange feeling about desecrating what is the final resting place of this Inquisitor. Any objections were quickly overcome because we were sent on a mission to retrieve the blade.

Arion climbs on top of the mass that was the daemon and gets to Adorjin. Both of her hands are clutching the sword and the Liber Daemonica is strapped to a chain on her hip. It takes a while to chip the ice away so that we can separate Adorjin’s body from the daemon. Once Adorjin’s body was free, I use the hover cart to levitate up to her level so that we can move the body onto the cart. Out of fear of the daemon I am now climbing, I instinctively start singing an old hymn to the Emperor. I notice that any fear I once felt slowing fade away. Once Adorjin’s body was taken care of, we were able to free both the sword and the book. Arion quickly put away the articles into his backpack. Odessa and I are now on high alert to any treachery from Trempan’s group.

Vogel seems relieved when we were able to get both the book and sword. Now he warns us that the Corsairs/Dark Eldars will be arriving shortly. The Dark Eldars seem to favor a breach within Hold 6. At this time we go about looking for materials that may slow down their advance. The enginseer and I go to Hold 3 and find multiple containers of flammable fluid as well as a tool set with cooper wires, flares, goggles, gloves and smaller containers. We bring this material back to Hold 6 so that we can setup traps.

As the enginseer is setting up grenade traps, Odessa and Arion are setting up their fire trap nearby. I am able to ride the hover cart back to Hold 3 to look for more useful materials. I hear Odessa ask Vogel if the name Akirvas means anything to him. Vogel believes that he has heard the Dark Eldars refer to one as Akirvas. After the traps were set, Vogel calls to our attention a small object on the wall. He uses some sort of telekinetic power to rip it off. He points to the small crystalline object and says, “They’re coming.”

Moments later, a 2 meter floating disk appears by the breach in Hold 6. A hologram projection comes to life. A booming voice says, “I am Akirvas, the leader of the Cabal of the Crimson Woe. Will anyone parlay with me?” Arion steps towards to hologram and inquires what the Dark Eldar want 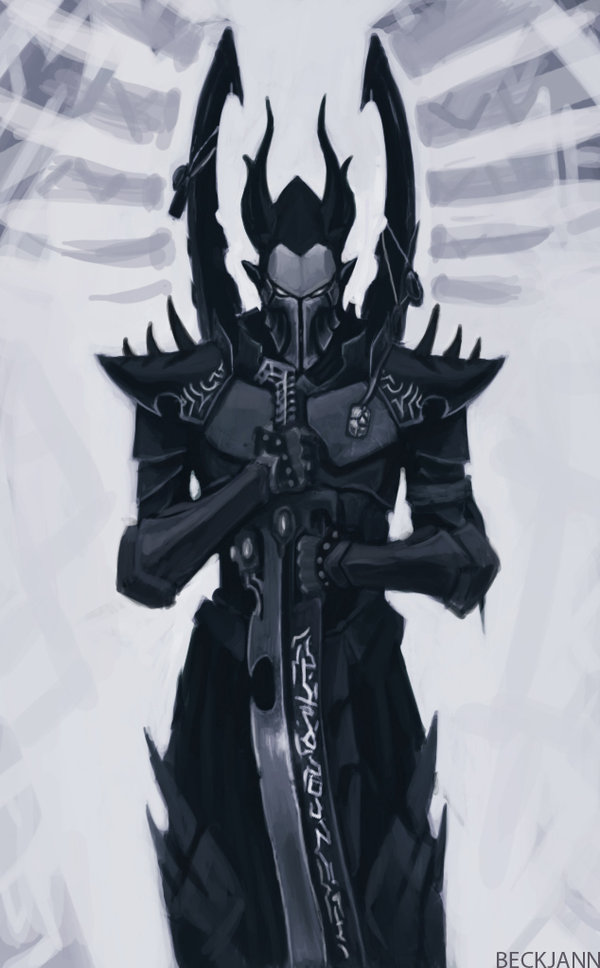 within the Twilight. Akirvas states that all he wants is to go through our possessions in exchange for our lives. We obviously do not acquiesce to their demands. Seconds later the platform explodes into pieces.

We have now all taken positions behind the cargo containers near the breach. Even in the darkness, we know that the Dark Eldar have arrived. It seems our grenade traps have worked since we hear a few explosions. We see the initial wave of Dark Eldar pour out of the breach. There may be six or so. We hear the distinct sound of the Dark Eldar weapons, similar to the sound of the one we confiscated. At this point, our group along with Trempan’s start shooting at whatever is moving out of the breach. We just have no idea how many of the foul xenos will be coming.

The Acolytes Spread the Emperor's Light in Hold #6 Who knew Eldar were so flammable?