Meeting at the Clockwork Court

Space zombies in the 40K universe?

We departed the PDF barracks and returned to Haarlock’s Folly. We had appointments to meet with the Quorum and Enforcer General Khan the next day. In the meantime, we decided to go back to Worm’s End to look for further clues. We were able to get an Arbites sedan to take us to the edge of the District XIII, where we walked the rest of the way.

Upon arriving at Worm’s End, we did notice some possible movement two buildings away. Neither my auspex nor Kensong’s servo skull were able to discover any further information. We entered the bar and looked for any clues about the names we had uncovered earlier. We found large stacks of papers dealing with the bar’s business. With Arion’s help, we sifted through the papers looking for names and possibly addresses. We finally found the names Sev Mcand and Luc Cisen. These matched the initial bar tab we found. Associated with Mcand, we found, “Under the Water stairs” and “Staying with Luc?”

We needed to find what Under the Water stairs meant. We canvassed the area near the bar to see if anyone would talk to us. Most of the locals did not want to come to the door as we passed by. We were able to finally get an old woman to open the door. She asked for some sort of local food that we did not have but we did offer a bottle of amesec. She took the bottle gladly and told us that the Water Stairs referred to the local areas where water was dispensed.

We travelled a few blocks to where the old woman told us the Water stairs were. We entered the building and went down one flight of stairs. Underneath the stairs we found a pile of junk with signs of movement underneath. We dragged out a person, whom we finally identified as Luc Cisen. After some convincing, Cisen detailed how three green hooded figures came into the bar looking for Mcand. These three wanted something from Mcand but when he was not able to produce anything, they killed him using blunt force and then turned their attention to the bar. Unable to find what they were looking for, the three left everyone for dead, except for Cisen, who was hiding under one of the booths. Cisen did say that one of the figures seemed to have a hole in his face. Similar to what happened at Viscount Hiram Sur’Seculo’s manse, the video pict recorder stopped working during the attack and resumed operation once the attack was over.

With this information, we traveled back to the Folly, where I seeked out Scrivener Anneliese Courtois again. We wanted to ask about the mirror that shows the future. She referred us to find Eupheme Tassel who is the Keeper of the Rolls. Her official title is the Sagacity. Courtois told us that Tassel could be found within the Clockwork Court. With our appointment with the Clockwork Court in the morning, we decided to leave earlier in order to seek out Tassel.

Upon arriving at the Court, we were stopped by security, where they asked us to identify ourselves. This process seemed longer than usual when we heard up ahead, the voice of Arbites Precinct Marshal Colchis Skarmen. He was screaming at some of the internal security workers. I could discern something to the effect of, “These were the honored guests of the Inquisition we are here to meet.” Then the lights go dim with the sound of explosions coming from the rooms ahead.

We all charge forward inside the Court. Arion takes a smaller door to the right and I end up taking the larger door towards the center. I enter a large antechamber where I see a few servitors and a long hallway ending with large brass doors. The servitors seem to be malfunctioning so Kensong decides to look closer. Before getting to the desk in front of the brass doors, I can hear more screaming up ahead. As I pull open the brass door, there is one guard behind the desk. He yells, what I am doing here and my quick response is, “We are the Inquisition, here doing your job!” As I step into the large circular room past the antechamber, I make eye contact with a green hooded figure. At this point, I see what looks like a grenade flying in my direction. I immediately dive for cover and was able to avoid the blast of the grenade. 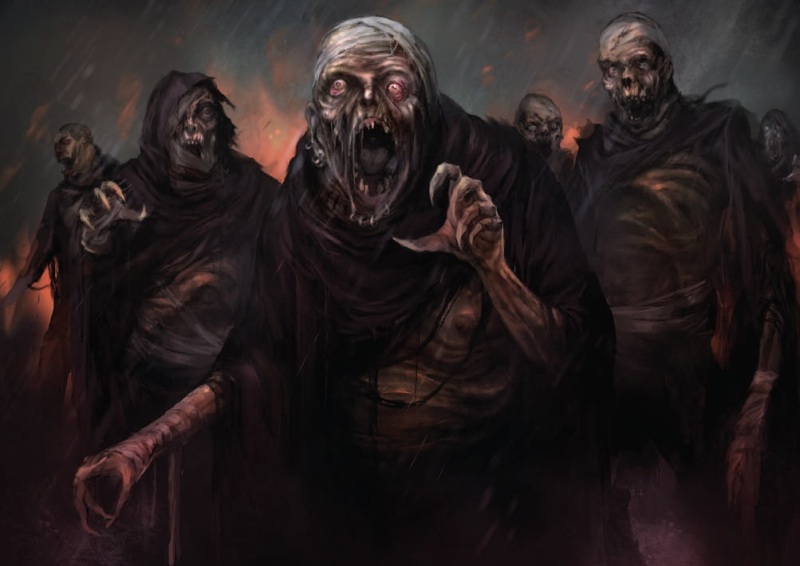 Karpath is now at to the large door with his lasgun in hand. I take a position behind the desk. The green hooded figure is now in the door way and we are able to clearly see that this person is not a person at all. This creature looks to be already dead but still possesses unusual strength and speed. Karpath unloads a semi-auto burst which seems to hit square on. Not noticeably affected by the las hit, this undead creature takes a swing at Karpath and connects. While Karpath remains standing, I can tell that I would not want to be hit by this creature’s fist.

I take aim with my longlas and take off the creature’s right arm. It’s still standing so I call to Karpath, “It’s already dead, move back!” I don’t think Karpath or anyone else could hear me through the micro-beads because all I was getting was static. I begin my tactical retreat all the while yelling at Karpath to move back. Kensong is now by my side and has his own visual of the undead creature. Karpath is then hit again by the creature but this time is knocked down and drops his lasgun.

I then see the same guard by the desk raise his weapon and starts to fire at the creature. This seemed to be just the distraction that was needed. Karpath picks himself and his weapon up and is starting to make his way back. As I am covering Karpath, I am thinking that we need more firepower.

Good work Intios – the Inquisition tends to be quite fond of first-hand detailed investigation reports…that it can then suppress….

Investigation of Lady Amorite’s manse We are the Inquisition…without badges!

Slaughter at The Clockwork Court This is unlikely to have a calming effect on the city.