The Acolytes show their expertise in aggressive xenos negotiations

While in the Shiny Goblet, my conversation with Lord Gabriel Kantor went quite well. I inquired if he had a relative that may have fallen from 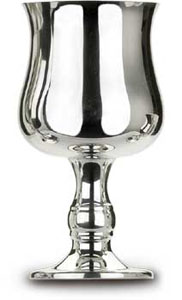 the ranks of the nobles and disappeared into the mid-hive. He started fuming and stating something about wanting to duel. I leaned in close and quietly said, “You do not want to do that. It will not be in your best interest to proceed with your rant!” Kantor stepped back, shaken. Arion then stepped in and said that we are just looking for some information and we are always discreet with information garnered. With his guard finally down, Kantor told us that his cousin, Varden, had recently disgraced the family name and disappeared into the mid-hive. He had someone look for Varden but did not find any information. Kantor suspected foul play. I asked for a description of Varden and then told Kantor I’d let him know if I see him.

We went back to the Inquisitorial safe house to get fully loaded and geared up. I put a call into Arbitrator Godgrafen inquiring if he had any contacts with the GlorAuthority in the Tourachon & Pasterkamp neighborhoods in the lower mid-hive. Godgrafen gave me the name of Gaston Bernotas, who may have some experience with that area.

I then called Bernotas, who claimed that he hadn’t talked to Godgrafen in years. I asked him if he had any experience with the Pasterkamp area. Bernotas didn’t want to divulge any information to new “associates” of Godgrafen so I sent him our signed and sealed letter of Sciscitatio. The sealed letter seemed to be good enough for Bernotas. He asked how he could help. I told him that we were planning on visiting the Screaming Wheel and if he could provide any further information about the area or the BabyFaces gang. Bernotas confirmed that the BabyFaces controlled Pasterkamp and that they are quite violent. With directions in hand, we set off for the Screaming Wheel.

Through various modes of transportation, we made it to the Screaming Wheel cantina within 4 to 5 hours. We walked into a tightly packed bar with the distinct smell of Lho smoke and tinny music blasting from a speaker within the room. The bartender identified himself as Kruger and proceeded to take our order. We noticed a group of 4 younger and well-dressed men in the back corner of the bar. I noticed that they were talking and laughing at a man on his knees just besides their table. I draw the attention of my team towards the man on his knees. Then a solid projectile round goes off and the kneeling man suddenly collapses.

Arion then walks up to the four young toughs in the corner. I follow a step behind. Arion asks if one of them is Skinner. They say who’s asking. We tell them that we heard that Skinner is the one to talk to about obtaining rare artifacts. We also mention that we received this information from Lans Guljian. Whether they believed our story or not seemed inconsequential as the opportunity for them to do more business was too hard to resist. The one who identified himself as Skinner told us to come back in 24 hours.

Arion then went to take a look at the backroom and discovered that there was a ladder that led up to the main concourse area. Arion also spent some time following the four BabyFaces we talked to as well as another associate that later stopped into the bar. Arion followed the 4 gang members to some sort of restaurant and then to a communication den. Apparently one of the gang members sent a coded message to another communications den. Arion was also able to find out the possible dwelling of the fifth associate which was located in a twelve unit hab block.

We stopped by 24 hours later to find the BabyFaces waiting for us. They were quite jovial when Skinner pulled out a box from underneath the table and told me to take a look. I step in for a look as Skinner pulls the cover of the box aside. What I see resembles the statuette that Lans Guljian had unopened inside his doorway. I involuntarily take a step back as Odessa states she can feel the warp taint on the statue. I say to Skinner and the rest of my team, “It looks good.” Skinner said this was a new shipment but he doesn’t always have control of new products received. He said he could keep an eye out for particular items if we wanted. He also said the price of this statue will be 35,000 thrones. Since Skinner said he would prefer an untraceable form of transaction, I told him it may be a few hours to get that sum. 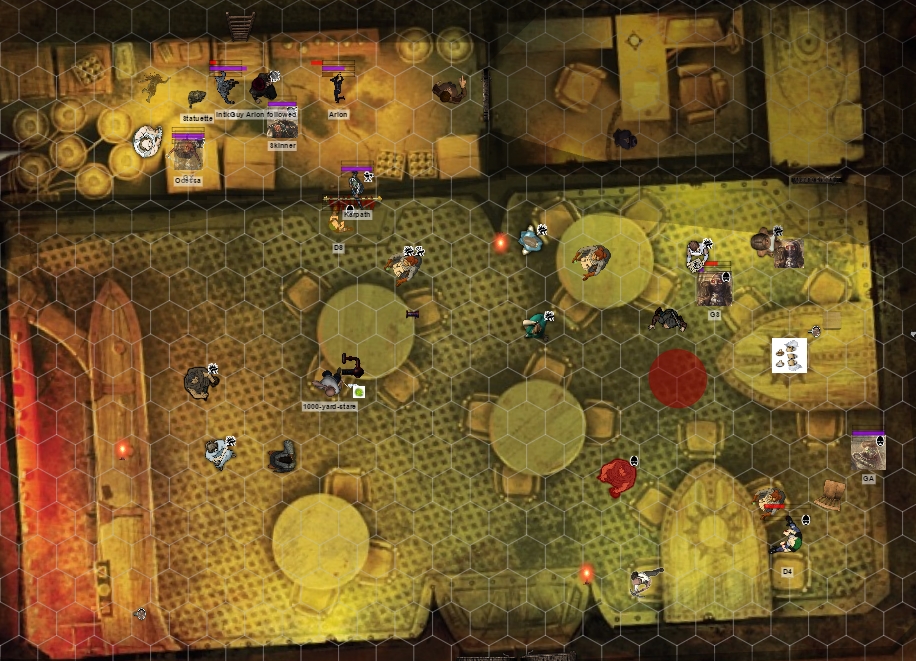 Arion and I stepped away from the statue and returned back to where Odessa and Karpath were seated. The four of us debated on our next course of action. It was decided that we would take down the BabyFaces here and now. We each had our assignments on who to take out. Our plan triggered when Arion walked up to the BabyFaces ganger standing next to Skinner. Arion made quick work of him by slicing him in the chest. Karpath shot the confiscated web pistol at the fifth associate that was standing at the bar. Odessa unleashed her bio-lightning at the ganger standing at the opposite side of the table. A shot from my heavy las pistol ended the life of the ganger that Odessa hit.

Unfortunately at the same time Arion cut his foe down, Skinner was able to unload a volley from his autopistol. It seemed like four shots hit Arion. With Arion reeling, Odessa quickly acted and used her warpish powers on Skinner and stunned him. There were two more gangers at their table and they quickly fired off their solid projectile weapons at me and Karpath. Karpath was able to dispose of the ganger to the far south by shooting him under the table. The ganger I was trading fire with eventually got out of his seat, seeing that Skinner had Arion’s knife to his throat. This ganger ran up to Arion and put his pistol up to Arion’s head and said, “Let Skinner go or I’ll blow your head off.”

Seeing this, I squeezed my trigger and by the grace of the Emperor, the ganger’s head immediately exploded all around and onto Arion and Skinner. Arion tilts his head towards me and as I have become accustomed to saying to the assassins I’ve worked with, “You’re welcome.” Karpath notices that the one hit with the web pistol has now escaped. He didn’t get far as he was just behind the bar. I walk over to Arion to help him with his hold on Skinner. I then hear a woman scream and run towards me. I told her to stop and when she didn’t, I shot her once in the body but it didn’t drop her. She runs by me and yells, “Oh no, Varden!” She stops at the now dead body of the one that was cut down by Arion. I quickly remove Varden’s mask and take a quick photo for evidence. We quickly strip the gangers of their autopistols and their concealed mesh armor.

We begin to make preparations to take both Skinner and Lino out of the Screaming Wheel. Karpath says he has spotted a few people on the ramp leading into the front entrance. We decide to take the ladder up from the back room and onto the main concourse. I would be first to go with Odessa following. Arion is tying up both the gangers with just enough rope slack for them to walk and climb the ladder with their own strength.

As I am climbing the ladder, I can tell that there are faces looking down into our area. I get to the top and notice that there are a few people standing around the opening. They disperse when I climb through. As I look around, I see one figure around the corner with a similar BabyFaces mask on. I hear a burst of autopistol fire and one round hits me in the arm. 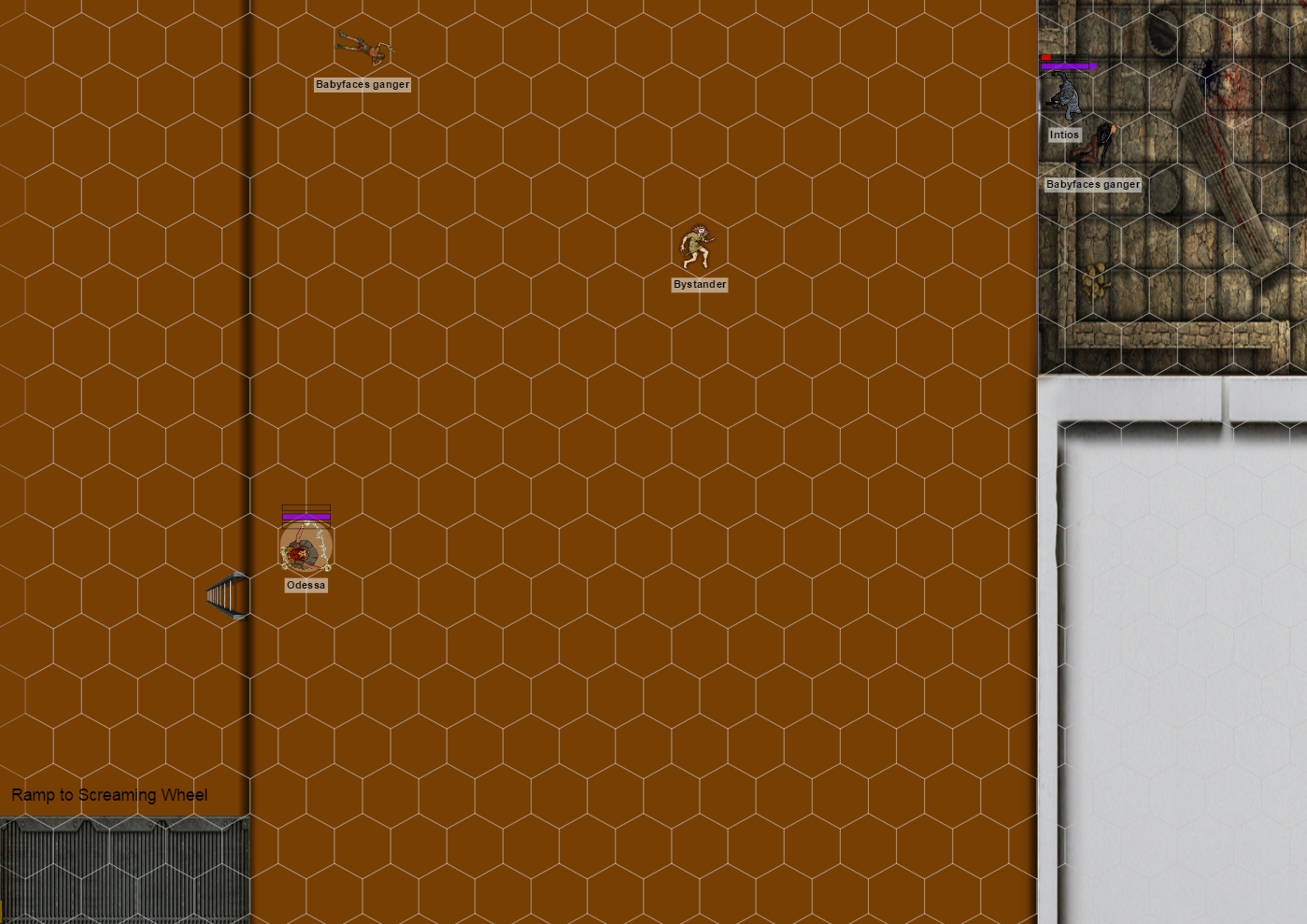 I immediately draw my long las. The Inquisition finally found it prudent to agree to my requisition from 6 months ago and now I am eager to put it to use. With a smooth pull of the trigger, I see his right arm disintegrate. I run to the location of the gunman that fired at me. Moments later, I hear another round of autogun fire. I am hit again but I am able to return fire. I hit this second gunman in the leg but he is still conscious. After trading another round of las and autogun fire, Odessa reaches the top of the opening. I signal the direction of the second gunman and she immediately lets out a bolt of bio-lightning. The gunman is now lying face down on the pavement. I start to take out the ammo of the autopistol of the first shooter and then run towards to second shooter and also empty the guns of their ammo. I leave the guns aside but put away the clips into my backpack.

I now anxiously await our two prisoners as well as the rest of our team.