The Ambulon Temple is Now CLOSED

Who knew the Inquisition had happy hours

My Investigation Notes
Theodosia was able to call in reinforcements into the church. Our team trades las, autogun and grenade fire with the newly arrived 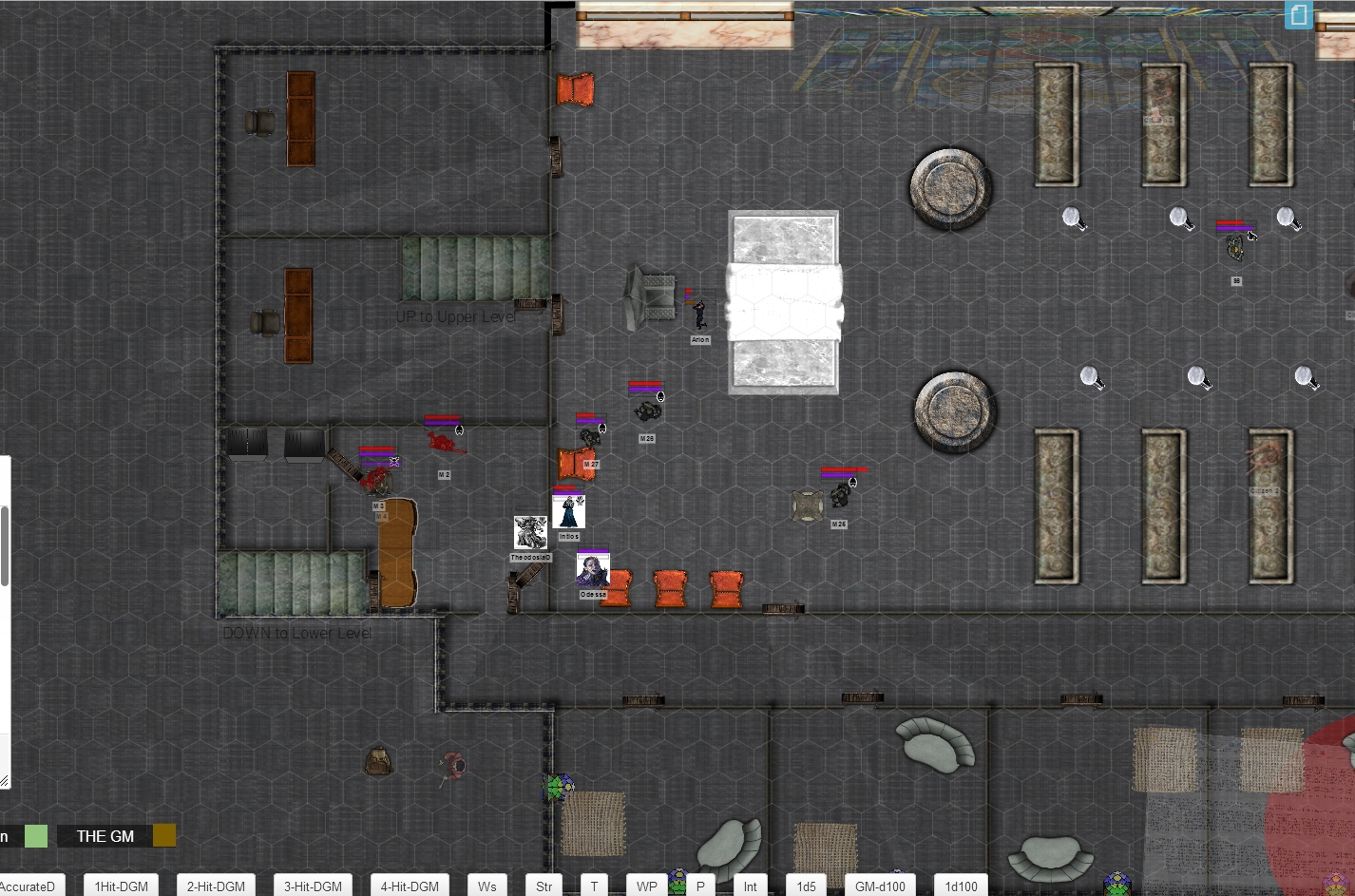 reinforcements. Odessa and I take cover from Theodosia’s power sword. Arion was able to defeat the cargo servitor with the clamp claw. The Cell’s assassin engaged Theodosia in extended melee combat, while the rest of us continued to battle his minions. Finally, the large augmented heretic wounded Arion with his crackling sword. As the reinforcements pour out from the basement, we hear a series of explosions coming from below. Theodosia and his band of mercenaries quickly move to egress the temple. In the waning moments of the foes’ presence, the already wounded Arion turns a corner & is riddled by autogun fire, dropping him with grievous injuries to his leg.

As we are in no condition to pursue, Odessa and I decide to investigate the basement. We quickly find a multitude of servitors attending to

a makeshift assembly line. Upon closer review, we can see that brains are being extracted from humans while the remaining body parts are being used to build more servitors. Odessa quickly discerns that the bodies are those of psykers. Close examination of the servitors shows that one was formerly Saia Strophes, Laurent’s niece that we have been looking for.

We are soon beset by a group of Magistratum officers. We identify ourselves as Inquisition and ask for their assistance. We gave them, Raneiro Bassi, as our contact in Hive Sibellus. With a quick blood test, they confirmed our identities and proceeded to help us search the temple. Of interest were the rooms upstairs. The last room upstairs had more security measures than the others. Once the doors were open, we found an office that was later identified as Theodosia’s. His main desk was booby trapped. We dismissed the Magistratum & contacted Acolyte Bassi to bring in Inquisitorial assistance. They disarmed two traps, one that poisoned & another wired to a large promethium bomb.

What we found in Theodosia’s desk was a plethora of information regarding the overall organization of the Serrated Query. We found files related to a major client of the Serrated Query. They had entered into a contract with the SQ to obtain technology from an Adranti planet, that they provided the location of (however, that location wasn’t mentioned in the file) There was a document called Defense of the Future: A Logical Discourse. It talked about how technology progress is essential if man is to progress. I recognized it as the core treatise for the Logicians, a heretical cult long hunted by the Inquisition & arch-enemies of the Adeptus Mechanicus. The file also detailed that the Harmony Meters used by the Joyous Choir were created using Adranti technology.

Within a sealed file of Theodosia’s, there was mention of another unnamed client. This new unnamed client had discovered Hesiod’s Wake’s peculiar absence of Imperial contact and had used this to blackmail the Serrated Query – silence about Hesiod’s Wake in exchange for information on the technology being acquired for the Serrated Query’s other client. The Serrated Query had planted their operative by the name of Azeth Hartok onto Hesiod’s Wake many years prior. We knew him as Jaleb Samtoll. There were details of how Martein Kathrinka was blackmailed to have Samtoll be Chief Counselor; the Serrated Query had learned that Viceroy Martein had an affair with Ignis. There was also mention of a previous agent on Hesiod’s Wake even before Hartok/Samtoll. This unnamed client had later further demanded that a provided Tarot deck be delivered to Administratum Adept Smyk that, as we know, eventually corrupted the Inquisitorial diviner Aristarchus. Lastly, the file mentioned how this Adept Smyk has unexpectedly turned up on Hesiod’s Wake seeking sanctuary from pursuit.

With this information, we returned to Sibellus and passed our information onto Septimus Dexter, Laurent Strophes and Inquisitor Karkalla. We were given some downtime in order to let Arion convalesce from his critical injuries and for the Inquisition to process all of the collected data. Several weeks later, we were called to Tricorn Palace by Inquisitor Karkalla. 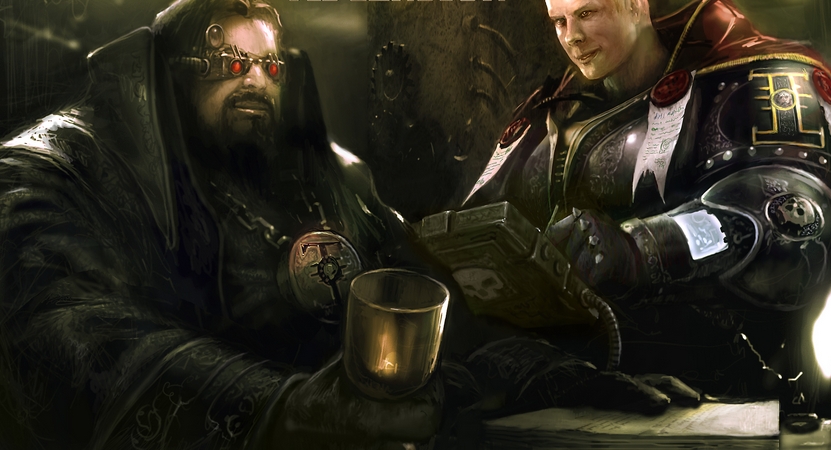 The gathering of Inquisitors was arranged by Inquisitor Artanyan. Artanyan is the Inquisitor that Acolyte Bassi works for. We also met Inquisitor Glavius Wroth. In various conversations as we wandered the room, we heard curious mention of a renegade Inquisitor Felroth Gelt, that the Inquisition had apparently issued a warrant for. Inquisitor Wroth seemed frustrated by the name, commenting that Gelt “was a ghost”. Artanyan had congratulated us on our discovery of the Xothic Blood Locusts, expressing surprise that our cell had not lost anyone in our contact with the xenos. Apparently this Gelt, before going renegade had lost more than one of his retinue to the winged monsters upon their first discovery.

We had a conversation with Acolyte Bassi, who explained that these causal Inquisitorial gatherings were very unusual, but his boss Inquisitor Artanyan was of the opinion that they were worthwhile. There was some overheard talk about a dangerous heretic referred to as the Burning Princess and a noted Witch Hunter named Fhendahl. Finally, we heard the name of Inquisitor Silas Marr, and how he’d been invited but didn’t come to no one’s surprise.

After hearing these bits and pieces of conversations amongst the Inquisitors and their retinue, a new figure walks in and gets the attention of Wroth and Karkalla. After a brief exchange, Inquisitor Wroth motions to our team to join their conversation. The new figure, who we heard addressed as Whitlock, continued to talk about a space hulk within the planet capitol’s space. From their comments, there apparently was no precedent for this – but, naturally, the Imperial Navy quickly moved to destroy the space hulk before it entered the atmosphere of Scintilla. However, Ordo Hereticus had given the temporary order to stand down.

Whitlock explained that he had serendipitously been in a Tricorn communications room when Inquisitor Vownus Kaede, Ordo Hereticus, had ordered the Navy to stand down. From what Whitlock could ascertain, the curious order had been given because of the presence of a Black Ship in the space hulk. The Black Ships being part of Ordo Hereticus, it appeared that Hereticus was taking point on an investigation of it. However, for reasons unknown it became apparent that Ordo Malleus thought they might be leading the investigation. Whitlock said that Hereticus was scrambling to field a team to leave immediately, given the intense time restriction, with the space hulk hurtling towards Scintilla.

Inquisitor Wroth, having just learned about our Cell from Karkalla, suggested to the group of Inquisitors that perhaps Ordo Xenos could send their “own” team, meaning us, since we are actually Ordo Hereticus on loan to Inquisitor Karkalla. He also pointed out, seemingly thinking it couldn’t hurt, that Kaede was a member of Order Xenos before moving to Ordo Hereticus.

We (and seemingly Inquisitor Karkalla) were certainly surprised at this turn of events, but suddenly Inquisitor Karkalla was leading us to the shuttle bay at the top of Tricorn Palace at a dead sprint to meet Inquisitor Vownus Kaede. After confirming our association with Ordo Hereticus, Inquisitor Kaede ordered us aboard a nearby Navy shuttle…the firing up as soon as we were aboard.