The Dangers of Xenos - Search for the Source

Too Late for the Lord of House Guljian 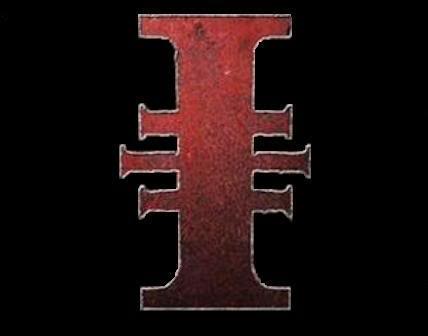 The unofficial Inquisitorial Task Force, dubbed Sciscitatio by Inquisitor Karkalla, went to the 9th Floor of Whittich Spire and scouted Hesentanz Manse, the dwelling of Lans Guljian. While there, they witnessed a man hurriedly entering in the middle of the night, a man they ascertained was there to render medical services. Their primary interest was gathering information on the troubled noble with none the wiser. Clear to Intios was that the 9th level of the Spire did not inspire respect from the noble patrons of The Shiny Goblet…however even noble residences on the lower levels are reasonably well defended against infiltration & snooping. Finding that to be the case, they decided to track down this medical practitioner that made late night house calls.

Through Imperial sources, the Cell identifies the late night visitor to Hesentanz Manse as Chirurgeon Arnout Morillon. Paying a visit to Morillon’s office on the 130th level of the Whittich Spire, the Chirurgeon confirmed that he was there to see Lord Guljian, whom he found delusional & ranting about strange impossible landscapes & cyclopean cities. Hearing this, Sciscitatio decided they’d better speak to Lord Guljian while he could still be spoken to. 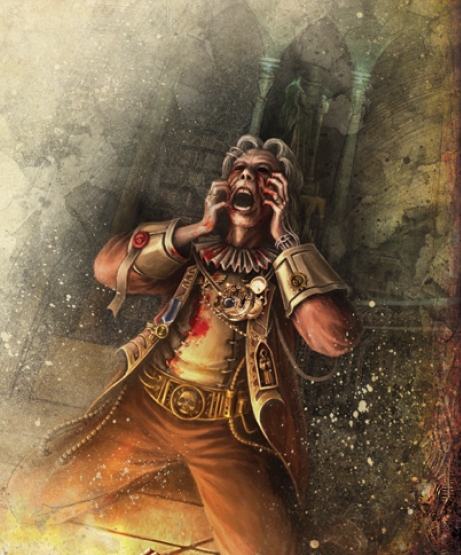 Arriving again at Hesentanz Manse, this time they just knocked on the door. House servant Hertil tried to get the Cell to leave, but a scream from above sent everyone running up the stairs towards the sound. On the third floor in the noble’s private den was a scene of chaos – embossed books & fine quills strewn about haphazardly, while parchment, ink and a lamp had been knocked from the desk, leaving only a small black orb sitting atop it. Kneeling on the floor, a man in ripped and shredded finery screamed and babbled incoherently as he clawed at his own face. His lips were ripped to tatters and blood streamed from numerous cuts and tears across his face. Lying near him was a bloody letter opener and two pulped white globs – his eyes. Arion rushes to the noble’s side & works to give him a sedative, while Karpath dashes to the table and smashes the orb, but to no visible effect.

Odessa stopped briefly on the first floor to identify a man who had been watching from above as they arrived – Sank Strenwell, Guljian’s personal bodyguard. Satisfied, the Inquisitorial psyker quickly follows in the wake of the others – but when she arrives at the aforementioned den’s doorway, her psyker defenses are overwhelmed by the warp-tainted xenos artifact on the table. Odessa immediately starts involuntarily experiencing a vision of a strange planet with an impossibly large structure floating on the chaos of the warp…she calmly walks right up to the table, staring unblinking at the smooth black object. Karpath, recognizing trouble, drags the psyker to the den’s doorway, where Intios joins to see what their warp maven’s situation is.

At that moment, a small female on the house staff rushes screaming from out of the darkness of the hallway outside murderously staring at the back of the ex-Guardsman. Held over her head is a 5-foot metal rod, which she brings down on the surprised Karpath with unexpected strength. He’s tough, though, and it succeeds in only a glancing blow off his armor. Karpath wheels on his frenzied attacker and hits her with a las bolt at close range, instantly killing her. By that time, Odessa has managed to force the chaos back out of the door in her head & the psyker’s wits return.

Arion has sedated the maddened Lans Guljian & bandaged his ravaged empty eye sockets, to at least prevent him from bleeding out. Succeeding in that, Guljian is calmed and begins to speak of being witness to many great and wondrous things. The Cell asks him to elaborate, which provokes him to laugh madly & begin ranting about forgotten kingdoms and cyclopean cities. He asks whether they have seen his beautiful black orb…and relates that he obtained it from the pale child at the wheel that wails. With that, the mad noble begins to speak monotone in a language that none there recognize. A short time after that the master of House Guljian expires. Arion determines that his self-inflicted wounds, as horrific as they were, were not enough to explain his death – it was as if his brain simply shut down. They threw a blanket over the orb & the assassin put the wrapped xenos object in his pack. 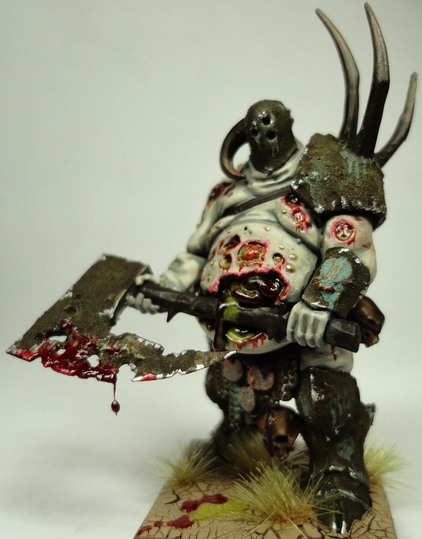 The Cell thoroughly searched the entire manse, coming up with an unmarked package by the front door. Hertil told them it had been there for some time, for he knew that his master would not have it touched. Upon opening it, they found a strange disturbing xenos-like statue inside that had a bit of lifelike blood on the axe that the strange figure depicted held. The Cell’s warp specialist could not smell the stink of chaos on it. The acolytes called the Arbites to secure the manse,and began to question the staff while waiting for their arrival. The bodyguard, Sank Strenwell, related that Master Guljian had started acting strangely about four months prior, after he’d obtained the black orb. Strenwell had been with Guljian at the Screaming Wheel Cantina in the lower midhive, when he’d purchased the orb from one known as “Skinner” in the Babyface Gang.

After trying to secure the statue in a supply closet at the small unmarked Inquisitorial office back in the midhive, causing clerks to look on in puzzled annoyance, they decided to take another run at any nobles currently present at their favorite highborn bar in Whittich Spire. Arriving at The Shiny Goblet, once again “Lord Karel de Raaf” (Intios) & his bodyguard “Solar” (Arion) headed in, while “Darial Garghrophic” (Odessa) & “Canto Zarkov” (Karpath) waited outside. The Cell’s ex-noble finding Lord Travet Papon again present, checked in with him on the rumor

that he’d shared the day before about an auction being held by a Rogue Trader…but Lord Papon had not heard anything further. However, ‘de Raaf’ was now armed with the name of the lower-midhive cantina, The Screaming Wheel, and used it here. It’s not unusual for nobles to gossip & perhaps Papon felt comfortable in doing so because ‘de Raaf’ was from far away Fenksworld. Upon hearing the bar’s name, Papon quietly shared that it was infrequently known to happen for a noble that had perhaps fallen from the ranks to disappear into the midhive, particularly the regions of Tournachon & Pasterkamp. Sensing Papon’s defenses were lowered, ‘de Raaf’ pressed the advantage asking whether anyone currently in the bar might…have some personal experience with this phenomenon. Papon suggested he speak to Lord Gabriel Kantor standing across the bar.

Papon had warned ‘de Raaf’ that this would not be a welcome subject with any noble and, as foreshadowed, Lord Kantor did not take kindly to someone he’d briefly met the day before asking about dishonored members of House Kantor. In a raised irritated voice Kantor expressed interest in a possible duel with the uncouth “Fenksworld noble”. To ’Solar’s’ surprise, not only did his protectee not back down, ‘de Raaf’ practically got into Kantor’s face. It obviously took Lord Kantor by surprise as well, as it was he who backed down. As a result of Kantor’s confusion from being mentally knocked off his mark in his own local bar, he ends up responding to ‘de Graaf’s’ bold interrogatory. Yes, in fact, Lord Kantor did have a cousin named Vardon that disappeared in the midhive some years back. Someone Kantor had hired to try to track his relative down had lost the trail in the Pasterkamp district.