Barabbas Thule spat a wad of congealing blood and broken teeth as he half ran, half hobbled through the dirty ruin of the hab. Though his path took him through intricate tangles of canals and walkways – a winding warren liberally strewn with rubble, muck, and overgrown flora – none of it really seemed to obstruct his path. He was making good time, yet the sounds of pursuit in the distance still made Barabbas’ pulse race. The gentle sussuration of bodies splashing and scrabbling through the labyrinthine hab was distant and faint, but it meant They were still looking. Barabbas needed to warn the others…but first he had to save himself.

Skirting a puddle of a dark, viscous fluid, Barabbas deftly navigated the surface to avoid its source – a broken pipe steadily leaking the smelly sludge – and continued to clamber over the rubble. Harsh white light filtered in through above, flickering in and out of life as the machine spirit inhabiting the overhead lighting system sputtered its indignation at having been neglected and unattended for years. Despite its valiant effort to illuminate the crumbling tenements, exposed plasteel girders and gantries prevented the lumen’s machine spirit from succeeding and deep shadows were cast over the hab. What was once housing for poor factory workers had slowly fallen into decay when Sinophia ceased being a primary staging point for the Angevin Crusade, the entire world becoming marginalized as its purpose faded and trade shifted to more lucrative worlds. While the district was always poor, its inhabitants had once retained their pride, had faith in the God Emperor, and were at least clean. Now the neighborhood was an unsanitary ruin.

Barabbas paused to catch his breath and turned to peer into the vast expanse of the vaulted undercity section of the Sinks behind him. Even with his keen and perceptive eyesight he could make out nothing out of the ordinary. Gently prodding his upper lip, turned fat with a swelling of blood, Barabbas ran his finger over the light moustache he took so much pride in. Barabbas grinned – more a sneer, really – and squared his shoulders despite the danger. To him, the peach fuzz was a sign of manhood and power.

To others however, especially with the swelling of his lip, the moustache looked more like a comically hairy grub dangled precariously under his nose. Adding this to his completely average looks and features, patchwork clothing, and gangland swagger, it was easy to dismiss Barabbas as just another low rung underhive punk out of the Sinks of thirteen. It would be nice to say that some glimmer or spark of willpower in his eyes gave him gravitas, something that made him stand out and call a person to notice him, but frankly that would be a lie. His eyes were just a dull, average brown.

Suddenly the smell of freshly cut grass hit his nostrils – obviously out of place in the dirty ruin of the Sinks. He had smelled this before, and always the odor preceded something dangerous – when he was 13, it allowed him just enough time to dodge the errant stubber round that pierced his room wall when a rival House emptied clips into his family’s apartment to try to kill his mother and sisters. At 14, it was the only thing that saved him from being beaten by the pack of bullying juves who would have had otherwise cornered him in the market when he tried to explore further up-hive. When he was 15 it helped him avoid the truncheon in the head which was swung by a power-mad arbites officer. Now 16, it only partially helped him flee the Spyrers who came to the undercity to kill for sport. It sadly did not forewarn his family who undoubtedly lay dead behind him.

With a roar, an armored figure burst through a wall a few meters distant… 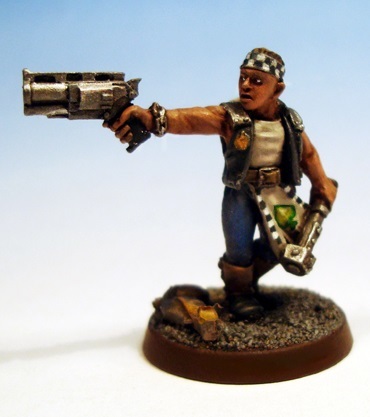