We didn't ask if they were lying?

During our time at the Wet Stool, we discovered there was a person by the name of Lesha Colasamte who was being held by the local enforcers. We were told that Lesha may know the whereabouts of Barabbas. We made an arrangement with the Arbites to contact the enforcers to have Lesha released. Upon release, Lesha told our team that Barabbas could be found in district II, near Apker’s cathedral.

We had an Arbites driver take us through district I and to the outskirts of district II because we needed to make the rest of the way by foot. Upon walking into district II, we could see this area and beyond start to look more dilapidated. With Magna Prime behind us, we walked into a promenade that had a distinct but broken fountain in the middle.

We soon discover a dead body in promenade. We found an ID that belonged to Thal Varus. Printed on the ID was 246 10th Line. Also an inscription, “May the Emperor’s gaze be always on me.” The body had an Imperial guard associated tattoo on his arm. Nearby, we found and broke into an Ecclesiarchy office. Reading the paperwork in the office, we found mention of the initials: TLB. Also mention of a lock box.

The walk to Apker’s cathedral would take approximately 5 hours. Further in district II, we found a glyph in the wall but could not discern its meaning. By this time, it was clear that we were being followed as we walked deeper into district II.

Arion took a slight detour and conversed with a man in a shed. Arion asked if he knew anything about the hooded figures we were seeing. The man in the shed stated that we are in their territory and they are everywhere. We were approached by hooded figures who asked for us to pay a toll. A total of 400 thrones to pass through their territory for the next couple of days. Our team was escorted into a basement of a large building. Inside, we met an ogryn named Urok, who is the leader of Those Left Behind. I have not encountered an ogryn and have only read about these abhumans. Karpath said they he served with a few in his former regiment but Urok was particularly large. Urok wanted us to not only pay the toll but also show our prowess in battle. We agreed to come back the next day. I was glad to be away from that basement because I felt incredibly claustrophobic and the hairs on the back of my neck were standing up. The oppressive feeling went away as soon as we stepped outside. This is one of those moments I wished we had our resident psyker around.

We finally made it to what appeared to be Apker’s cathedral. We had explored the Narthex of the cathedral a bit, but couldn’t get through the locked doors into the Nave. So we left and entered the large hab block that the cathedral is attached to. We entered the lobby and then searched the next two floors above, finding empty habs. Then after searching the 3rd floor, we were in its stair lobby. Arion stopped and began talking to a male standing in the stair lobby of the floor directly above. Arion had a conversation with him, asking him about Barabbas. Arion started up the stairs; the rest of the team followed and down came two grenades. Arion was able to run past the intended blast zone and up to confront the cultists. Karpath and I were not as lucky and took hits from both grenades. Lucky for us our flak armor did its job. Kaunitzer was not as lucky and he was pushed backwards from the blasts.

Arion quickly ran up the stairs and disposed on the first cultist. I followed up the stairs and was able to take down a second cultist with my longlas. Karpath standing on the base of the lobby stairs fired his lasgun towards one of the grenadiers. After engaging the third cultist in melee combat, Arion was able to dispose of him quickly. There was a fourth cultist that escaped into the hab door toward the east. 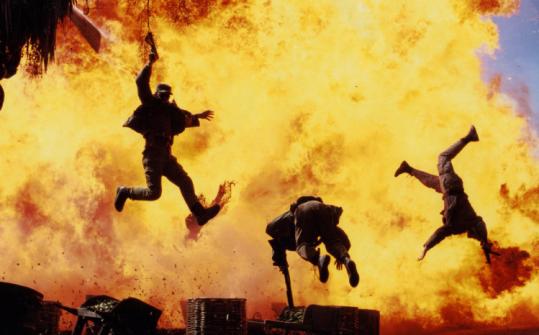 We quickly checked the bodies of the dead cultists and found mention of a cult called the Path of the Setting Sun. We entered a hab door and found the last cultist in a 6m x 4m open room. He was hugging a humming mechanical device and totally ignoring us. Karpath hit him in the head and I grabbed the device. Not being able to figure out the device we stepped away but not before the mechanical humming stopped. At the moment the sound stopped the device exploded and blew me and Karpath back. My ears were ringing as I layed on the floor. All the while shaking my head and thinking how did I allow myself to fall for this trap? The only one not affected by the blast was Kaunitzer because he was pilfering the autogun I told him to grab from the first cultist. I realized that I could not put weight on my left leg and discovered that it must be fractured. I put together a quick splint with a broken piece of wood and told the others that I will need to be off my feet for the night. 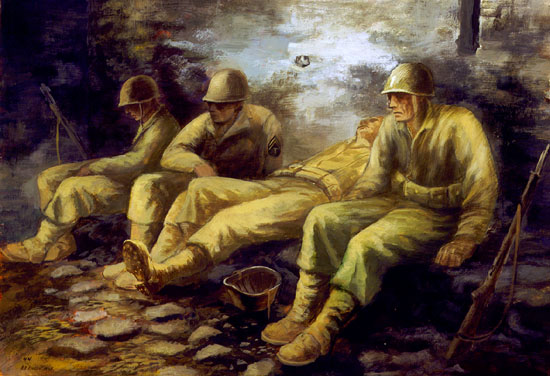 We needed a place to rest undisturbed and thought about an empty hab room. We decided to settle in at the cathedral where we would rest for 10 hours. Each of us taking 2.5 hour shifts for guard duty. With the use of our advanced med kit and Arion’s help, I was able to medicae the rest of our team back to good health. My wounds were a bit more egregious but I took the chance and healed myself. Someone tried to get in at night but Arion told him to go away.

By 10AM the next morning, we opened the double doors of the cathedral and discovered dead bodies all around. Some of them impaled onto the large statues within. We pulled the bodies outside and created a pyre to burn them. We know that the burning pyre will attract attention but hope that our search for Barabbas this deep into district II is not in vain.